A narrative soundscape with images by Michal Glikson 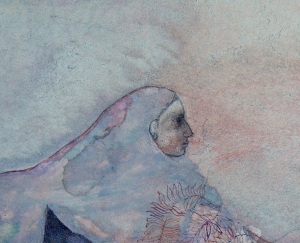 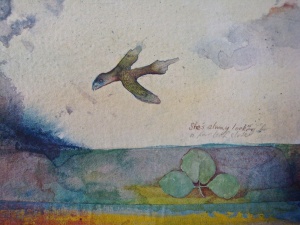 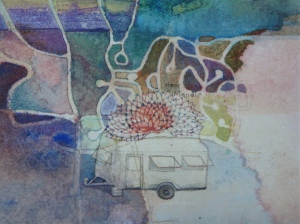 Caravan of Ling, watercolour on paper 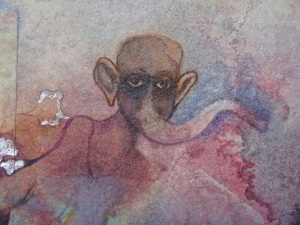 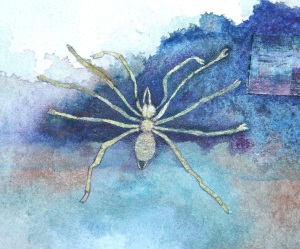 Dear Safia… comes out of my PhD project: Looking for taaluq: cross cultural experience examined through painting and sound

The work journals ideas about identity and alienation as they arose in context of my observations of Lake Burley Griffin, and living in Canberra in 2012. It reflects on these in the form of letters to Safia, a Pakistani woman I befriended in Lahore while working in Pakistan in 2011.

Making the work was a way of expressing my adjustment across cultures and coming to grips with life in Canberra, comparatively young, empty and naïve in comparison to the ancient megacity of Lahore. The Lake Burley Griffin became a place of solace around which I walked daily, sketching, recording its sounds, observing life along its shores and reflecting on the idea of it as “a toy that wants to be real”.

I found myself squinting at lake features, looking twice, through eyes coloured by ideas about colonial links between Australia, India and England. I researched its history to find myself thinking about early Canberra that was peopled by migrants. I recorded conversations with some of these, including my own family. I also learnt about particular pockets of the lake. I came to notice that the water had a “body” and “mind” with distinct moods and divergent cultures – ideas that I brought into writing for the script and narrative.

At the end of year I felt I had only touched the tip of this collection of worlds, the product of this time being two distinct works: a scroll painting about four meters long, and a seventeen minute sound track with narration. Integrated these became Dear Safia, a video subsequently completed in April 2013.

Of the many who assisted me I particularly wish to acknowledge the following people and organisations for their ongoing encouragement, contributions and support of my work:

All sounds (except for materials by others listed in Sound Sources), images and texts  © 2013 by Michal Glikson

Audio materials from other sources:

Audio clips from royalty free online sound sites (www.looperman.com and http://www.friendsofarandabushland.org.au), and the recording of Maranoa Lullaby sung by Harold Blair from the National Film and Sound Archive (Permisson for use in this work has been granted by NFSA on 2/4/2012)

Michal Glikson is a visual and performance artist whose recent works focus on the living experience across the cultures of India, Pakistan and Australia. Since 2004, she has been creating illustrated scrolls incorporating histories and stories of people she met while travelling across India, Pakistan and Australia. An integrated part of her creative works involves writing narratives to accompany the scrolls and recording sounds on her journeys.

Her current research project focuses on the ancient storytelling tradition of Bengal Patuya Sangit – performance with scroll painting as a way of forming sound components in response to the illustrated mythology or parable. Her stories enfold panoply of beings – people, animals, plants, terrains encountered across cultures of Australia and the Indian subcontinent as a way of exploring ideas about empathy, and connections.
She completed a Masters in Visual Art at the Baroda School, Gujarat, India and studied Miniature Painting in Pakistan. She is currently a PhD Candidate at the School of Art, Australian National University (ANU)